A year ago I vowed to write short stories and post them on this blog.  Well, I wrote one.

Don’t get me wrong, I love making up stories for Meg and Sam.  Whenever we are on a long car ride, inevitably I will end up telling them stories about the Tie Dye Teddy Bears or Booger the Goat, their two current favorites.  And they have literally begged me to write the stories down.

But for now I’m gonna switch it up and instead write short stories that appeal to me, myself and I.  Woot.

That is all, earthlings.

Everyone has secrets. They can be funny, or embarrassing, disturbing, or even criminal. The list goes on and on.

Why is it that people are so interested in finding out other people’s secrets? I, myself, have always been drawn to mystery and detective stories. I love/hate it when I solve the case before the hero. I love it because it makes me feel smart and superior to everyone else. But I also hate it because that means I’m smarter than the hero of the tale and know the end before it happens which is pretty anticlimactic.

I also love/hate it when I can’t figure it out and then the solution turns out to be incredibly obvious. I love it because that makes it that much more suspenseful and the hero of the tale is worth my admiration because they actually did solve the case. But I also hate it because that means I’m stupider than I thought I was, I mean, it was staring me right in the face the whole time.

But that’s all just in stories. Real life secrets are usually much more mundane. The real reason they become secrets is that they’re far too boring to tell anyone. You never say anything and so it just remains your own little secret.

I have secrets, just like everyone else. Some of mine are really boring, some are sad, some disturbing. None of them are criminal. (At least I don’t think so.) And as I sit here trying to think of secrets I wouldn’t mind sharing here in this post, I am struggling. The real secrets, the disturbing ones from my past are much too private and personal and honestly, I don’t want to share them with anyone. I don’t want to share the sad ones either. They’re sad! I don’t want to bum anyone out. And the boring ones are, well, boring. It’s the kind of stuff people post in “25 Things About Me!” on FB. They aren’t real secrets, just the stuff other people don’t know that you secretly think is very interesting about yourself. (But no one else does.)

So I’m going to sit here and think of one real secret about myself that’s:

But to qualify as a real secret it has to be something I don’t necessarily want people to know, something that makes me a little uncomfortable to share. I also don’t want to share anything that could hurt someone by reading it. This little secret sharing experiment is meant to be fun, after all! So this is going to take some time. 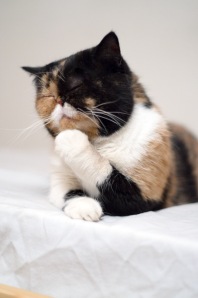 But while I’m thinking you get to become a time traveler. I’m going to sit and think about this. It could take hours, days even. But you’ll get to read what I’ve come up with right now, in fact, by the time I finish this sentence…

Ok. I’ve got it. After much inner debate (and the opinions of 3 other people), I have decided to tell about my first experiences with alcohol. It goes like this: (Drop the beat)

My parents held their first Messianic Seder. (It’s Passover but with Jesus.) Because of Passover there was a lot of wine in the house and there were so many people my folks didn’t notice that I drank 4 glasses of wine that night. Needless to say, I was completely buzzed by the end of the night.

A few days later, after Passover, I realized there was still quite a bit of wine left. I started sneaking sips of wine here and there when I was alone in the kitchen. I wasn’t drinking much so I figured no one would notice.

My parents called my sisters and me into the kitchen to ask who had been drinking the wine. My sisters, of course, denied it and so did I. The only difference being that I was freaking lying.

Now, the way I remember it, mom and dad weren’t satisfied with all those denials, they wanted someone to ‘fess up. So I suggested that one of my sisters’ friends (who were pretty young) had perhaps thought it was juice and accidentally drank some. That seemed to do the trick and it was never brought up again. I was much more careful from then on.

My parents still do not know this story. But since it’s been 20 years since that happened,  I’m hoping if they read this blog they will find it in their hearts to forgive me.

So there it is. Not my deepest, darkest secret. But hopefully you found it humorous and maybe a little revealing.

I think discovering someone else’s secrets humanizes them for us and boosts our self-esteem a little.  We know all of our own faults and evils but unless someone tells us theirs or we discover them on our own, we might begin to think they don’t have any or that they are somehow better than us.

Let me confess to you now that I have many faults and evils. I am keenly aware that no other man on the face of this earth could be as kind and understanding and forgiving of my many sins as my dear husband. I am truly grateful that even now, 15 years later, after hearing all of my secrets over the years, Nick still loves me and wants to be married to me. That’s freaking nuts, baby!

But that’s nothing compared to my heavenly Daddy. Dude, he doesn’t just know all my messed up stuff, He witnessed it! WITH HIS OWN EYES. And, yet, He loves me, forgives me, redeems me, cares for me, provides for me. That’s not just nuts, it’s like face-explosion, nuclear brain mushroom cloud, bananas, Carl! Man, that’s so awesome. Just thinking about it is making me all “hot-fudge-brownie-sundae-with-hot-marshmallow-goo” inside my heart.

Secrets are crazy, baby! But it’s your turn now. I wanna know one of your secrets. Leave me a comment, chuck me an email, text me, call me or whip it through the snail mail. Make it as juicy or fluffy as you like. I ain’t judging. And I won’t tell anyone what you told me neither. (Unless you ask me to. Haha) Open the luggage of your soul and let me have a peek inside. Unburden, baby. It’s gonna feel good, I promise.