I wrote this poem tonight for someone I love. As you read it, be that person. Put yourself in their place. Be Kintsugi. I love you.

A friend suggested I record myself reading my poem aloud. So this is for them. Eff word warning. There are plenty.

Something beautiful and terrifying and breathtaking and wonderful and world ending is taking place right now in the middle of 2020. If you don’t know what I’m referring to… *insert sarcastic comment here about rocks/hiding under/caves/etc*. SOMETHING is happening and it is new and different and NEEDED and loooonnnnnggggg OVERDUE.

If you are one of these white people who STILL doesn’t get it, I will now explain it to you, white person to white person. No one, including the founders of Black Lives Matter, is saying that all lives do not matter. We know that all lives matter. But all lives are not in danger. All lives are not experiencing systemic racism and police brutality. Black lives are the ones in danger right now. Black lives are the ones experiencing racism and police brutality. No one is threatening white lives at a systemic level but it’s been happening to black lives since before the founding of this country. Systemic racism is literally built into the DNA of our nation beginning with the enslavement of Africans, who were literally forced to build our nation while having no rights of their own. And don’t forget the atrocities white people committed against the Indigenous population at the same time. The white population of America has always had the upper hand.

If this didn’t explain it to you in a way you understand, let me try with these 3 explanations that I particularly like:

3 Then Jesus told them this parable: 4 “Suppose one of you has a hundred sheep and loses one of them. Doesn’t he leave the ninety-nine in the open country and go after the lost sheep until he finds it? 5 And when he finds it, he joyfully puts it on his shoulders 6 and goes home. Then he calls his friends and neighbors together and says, ‘Rejoice with me; I have found my lost sheep.’

If you have 100 sheep and one is in danger, you leave the other 99 where they are safe and you go and rescue the one who is danger. All the sheep are important but only one needs help. 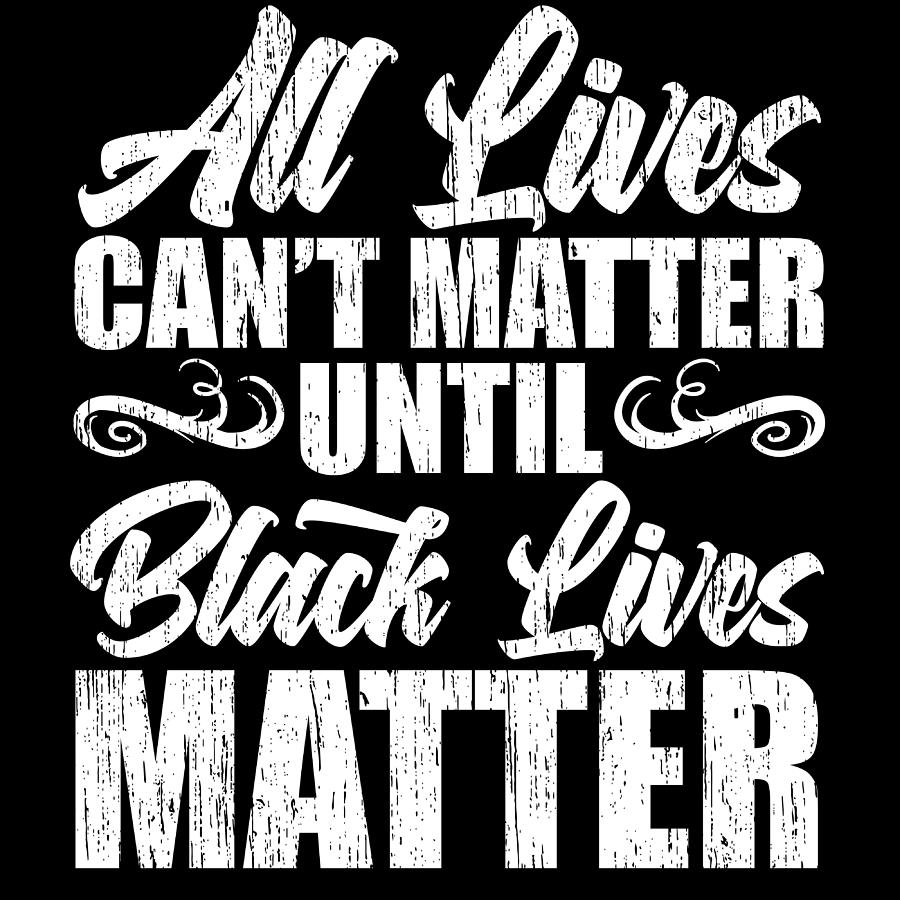 Do you get it yet? I hope so because it is important.

You may not be aware of this but saying “all lives matter” is a form of gaslighting.

Gaslighting is a form of psychological manipulation in which a person or a group covertly sows seeds of doubt in a targeted individual, making them question their own memory, perception, or judgment, often evoking in them cognitive dissonance and other changes including low self-esteem. Using denial, misdirection, contradiction, and misinformation, gaslighting involves attempts to destabilize the victim and delegitimize the victim’s beliefs.

Do you see it? A black person says, “I matter” and they hear in response, “Everyone matters”. It IS an attempt to delegitimize their beliefs. It IS meant to sow doubt and make them question themselves. AND IT IS EFFECTIVE. People have been saying “All Lives Matter” since Black Lives Matter began and it has taken SEVEN YEARS for the phrase “black lives matter” to even begin to make a dent in the minds of white people. That’s because “all lives matter” is such an effective gaslighting tool, it makes the white people question the legitimacy of the belief that black lives matter because if they even start to entertain the idea that black lives do, in fact, matter, they are hit by “all lives matter” from a fellow white person and it destabilizes their newly formed belief.

(I would also love to go into this thread of tweets I read this morning, but I will leave it in the more than capable hands of its author, Claire Willett. IT IS A NEEDED EDUCATION FOR YOU FELLOW WHITE PEOPLE. So when you’ve finished reading my post, go back, CLICK THE LINK, SETTLE IN, AND READ THE WHOLE THREAD.)

not to be the white asshole who just got here five minutes ago & is already like "I CAN'T BELIEVE YOU DIDN'T KNOW THIS, GOD, MEGAN," but in researching my book I learned some stuff history class omitted which might be helpful to other white folks, specifically about Fred Hampton.

So…. where did we leave off? Oh, that’s right, gaslighting.

Right now, I feel like I’m going to puke and start sobbing uncontrollably. That, my friend, is the result of being massively triggered by all this “all lives matter” bullshit. I’ve tried multiple times now to craft a coherent sentence to follow these and I’m struggling to say the least.

My childhood and teenage years were marked by gaslighting. I am a survivor of its effects. And while I have been actively working through my trauma for the last two years, I am far from healed from it. Every time I read another comment or statement from a white person who denies systemic racism, says “all lives matter” or “not all cops are bad”, etc, etc, panic sets in. I start to shake, my stomach churns and my chest tightens. I see the smug face of my gaslighters telling me I have to just agree with them whether I want to or not, telling me that what I just said I believe is not actually what I believe, telling me my memory of events is wrong and never happened. It’s then that I know I am utterly worthless to them, they see no value in me as a human being.

Two years ago, I cut my parents out of my life and began unfriending on Facebook and Instagram any person I thought might hurt me or might not give a shit about me. I started distancing myself from any instances when someone could gaslight me again. I’ve taken care to avoid internet trolls by deleting comments, blocking people and unfriending. I’ve tightened my circle and been careful about who I let into my life. It has really helped. I’ve found myself in ways I never thought I could.

But now we are here. June 2020 and the gaslighters have invaded my world again and I’m not sure how to stop them this time. They’re everywhere. They’re even in people I thought I knew. I don’t even have to look at Facebook to find them. I just have to hear about police tear gassing a protest and that’s enough.

If you weren’t gaslit for 39 years by family like I was, you probably won’t get any of this. But then again maybe you will.

But here’s the point I want to make and I hope you really think about this: I’m this traumatized by being gaslit by a handful of people my whole life. Not all of society. Granted, the people who gaslit me were family and that’s important. But imagine being gaslit by the entire nation. Imagine growing up in a world where you were constantly and consistently being psychologically manipulated by society covertly (and not so convertly) sowing seeds of doubt in your worth as a human, making you question your own memory, perception, or judgment, often leading to cognitive dissonance and low self-esteem. Imagine an entire nation using denial, misdirection, contradiction, and misinformation in an attempt to destabilize you and delegitimize your beliefs.

It’s crazy making. And that’s the point of gaslighting. To make you feel like YOU are the crazy one.

Imagine all of that happening to you because of the color of your skin. If you are white, I’m telling you, you don’t know what it feels like. Even with my own experiences of being gaslit by family for so long, I can confidently say that I DO NOT KNOW WHAT IT FEELS LIKE TO BE BLACK. And because I am white, I will never know.

White people, stop taking away from the black experience by saying “All Lives Matter”. I want to keep this polite but I just can’t so please just shut the fuck up. Stop gaslighting black people. Just stop.

I want to leave you with a poem I wrote last night. Be aware that I use the word “fuck” heavily in this poem and if that bothers you, maybe you shouldn’t read it. I wrote it because when I try to catch my breath right now, “fuck” is the first word that pops into my head. It seems to be sitting in my chest all the time and I wanted to explore why this was happening to me. Writing the poem helped me realize that I was struggling with my trauma and being triggered by all the gaslighting I was seeing on the news and social media. I’m sharing it because it’s possible you’ve had “fuck” sitting in your chest too. And it’s really nice to be seen.

(ALSO, I am not now, nor will I ever compare my trauma to the atrocities that BIPOC (black indigenous people of color) have suffered at the hands of white oppressors. I recognize my white privilege.)

PS. Here’s Seth Rogen responding to comments of “all lives matter”. I just want to hug this man. 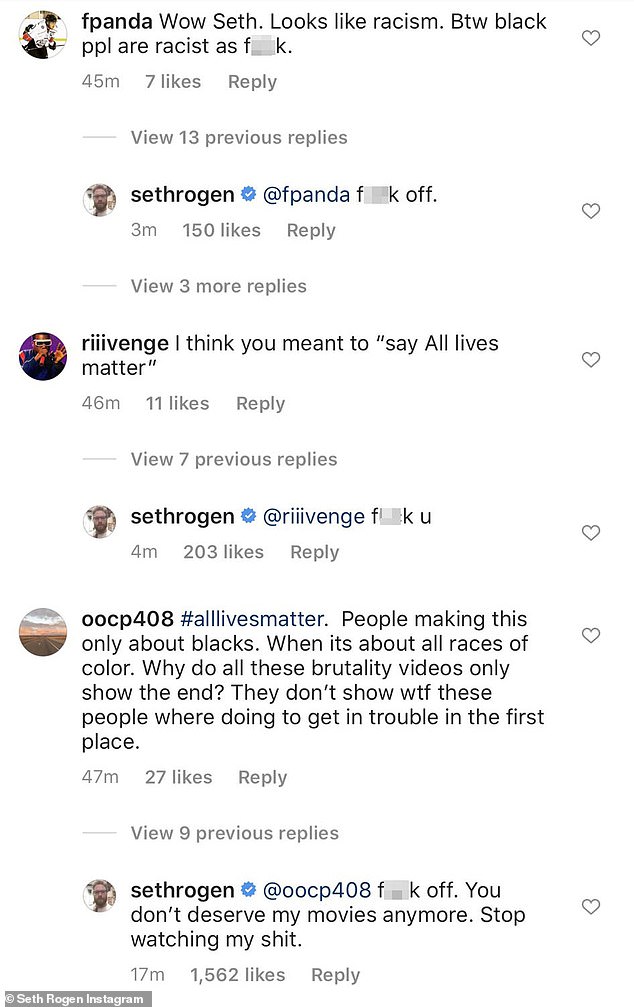 PPS. I disabled comments because I’m honestly too fragile to hear anymore racist bullshit. I can admit that I’m not strong enough to withstand more hate and gaslighting. So don’t seek me out in other ways to tell me you disagree with me. That’s a good way to get you canceled from my life if I know you personally.

I’m scared. The whole world is scared. I think I ugly cry at least once a day. I check the stats on COVID-19 before I go to sleep. And then again as soon as I wake.

My oldest child has Type 1 Diabetes which is an autoimmune disease. At her last doctor’s appointment at the beginning of March, we were told her A1C was better. It’s still much higher than the average person’s but it’s good for a teenager with T1D.

My husband works with the public every day. He owns a business fixing food service equipment. So he and all his employees spend their days in restaurants, grocery stores and gas stations, fixing the equipment the public touches minute by minute. And even though he’s wearing gloves and showering when he comes home and we have hand sanitizer right by the front door, I’m scared.

But I know I’m not alone in my fear. I know others in much more dire circumstances are just as afraid and have fewer resources.

So I took my panicky heart this morning and wrote a poem that is just as much prayer as it is poem. It’s called “Be.” And expresses what I think God is saying back to me. Maybe it’ll say something to you too.

I don’t know how
How you take me this way
Hold me like marzipan
In your warm, wizened hands
Tell me it’s ok
To feel
All the things

Why don’t you say
Look
Be
Do

WHY DON’T YOU CHANGE ME

Breathe in
Whooo
Breathe out
Whooo

What must I do?!
I cry out
To earn this gift!
I have to know

I strain my ear to listen
Quiet everything to hear

But what I hear is…

Be.
It is enough
Just to be

Don’t curse it, my love
This was not for your harm
I am the rain, Love
I am the storm

The fig leaves are gone
You’re free of the clay

Just be, my sweet love
Be.

It is enough for me.